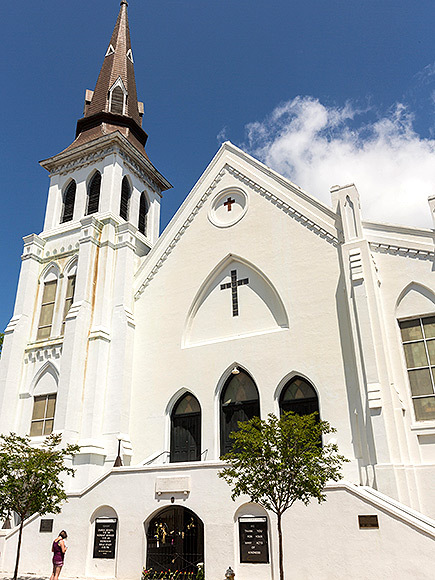 Emanuel African Methodist Episcopal Church, often referred to as Mother Emanuel, is a Gothic Revival style church built in 1891. The congregation is the oldest AME church in the South and houses the oldest black congregation south of Baltimore, Maryland. The church’s roots stem from a group of enslaved and free African Americans who withdrew from Charleston’s Methodist Episcopal church over a disputed burial ground, and formed a separate congregation. The church’s 1400 members and their leader Morris Brown established an African Methodist Episcopal church. Two years later, Brown and other church ministers were jailed for violating state and local laws, which prohibited religious gatherings of enslaved people and free blacks independent of white supervision.

In 1822, the church was investigated for its involvement in a planned uprising of enslaved Africans led by Denmark Vesey, one of the church's founders and a former slave who was able to purchase his freedom with a winning lottery ticket worth $1500. Vesey became a successful carpenter, especially among Charleston's majority black population. In 1821, he formulated a plan to win freedom for the enslaved people of the city. The authorities were informed of the plot before it could take place. Three hundred and thirteen alleged participants were arrested, and 35 (including Vesey) were executed. The plot created mass hysteria throughout the Carolinas and the South. During the Vesey controversy, the AME church was burned. Worship services continued after the church was rebuilt until 1834, when all-black churches were outlawed. The congregation subsequently met in secret until 1865, when it was formally reorganized, and the name Emanuel was adopted.