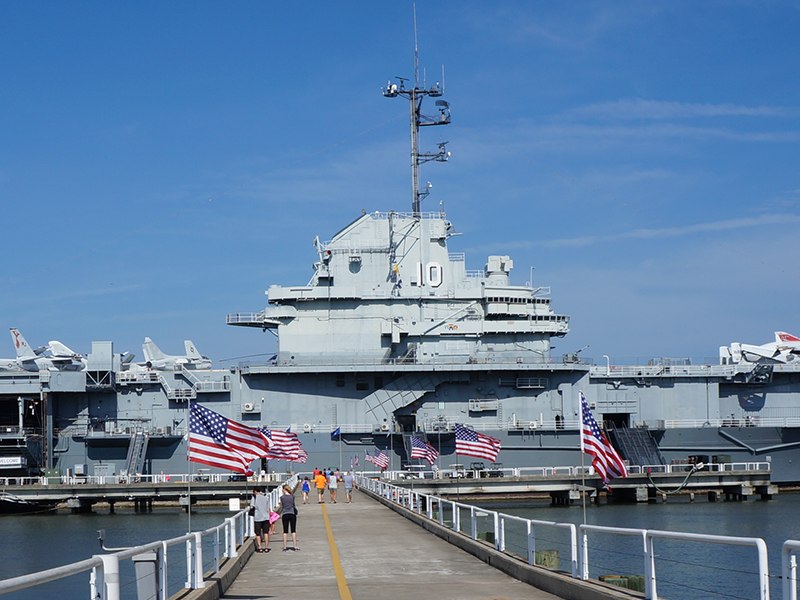 Patriots Point is one of the largest museums of its kind in the world. The museum gives visitors the chance to tour the aircraft carrier, USS Yorktown, along with a destroyer ship and a submarine. Visitors can also visit the Vietnam Experience Exhibit and the Medal of Honor Museum.

The USS Yorktown was the tenth aircraft carrier to serve in the United States Navy. The carrier was commissioned in 1943 and participated significantly in the Pacific offensive, which began in late 1943 and ended with the defeat of Japan in 1945. Yorktown received the Presidential Unit Citation, and earned 11 battle stars for service in World War II. The carrier was later used off Vietnam and recovered the Apollo 8 astronauts and capsule before being decommissioned in 1970.

Just about the entire ship is open to the public. Tour the huge flight deck and then sit in the captain’s chair. Pictures and exhibits give a true glimpse into what life was like on the ship. After the tour, enjoy a hot lunch in the aircraft carrier's C.P.O. mess hall or grab something at one of the two snack bars. Expect to spend about 3-4 hours to see everything, and plan to do a lot of walking and climbing steep stairs.

Vietnam War veteran and author Joe Tyson Sr. will participate in a book signing event at Patriots Point on Tuesday, August 9. Tyson wrote the memoir “Unfortunate Sons”, which tells the story of his time as a Marine tanker in Vietnam. The book covers Tyson’s seventeen months of patrols and combat experiences, plus the challenges of veterans returning home from war. Tyson will be signing copies of the book on the Hangar Deck of the USS Yorktown from 10:30 a.m. - 2 p.m. A general admission ticket is required.